Learning to be a Patient 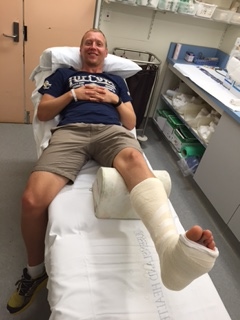 While on a trip recently, I got a first hand experience with the Australian healthcare system.  Who would have thought that going to the beach could be so dangerous?  The day at the beach with my family seemed unremarkable. We packed our beach bag, brought enough water, snorkels and beach towels.  After a few hours of beautiful beach time, we headed back to the vehicle. On this short one kilometre trip back to the vehicle along a dry river bed, my left foot slipped off a stone into the one and only small mud patch along the path and down I went. Getting up, my left foot really hurt. It was clearly cut and bleeding but did not look too bad (at least to me). Of course,  a physician view of what is bad is significantly skewed.  It hurt to step on my foot, but I could still walk putting weight only on my heel.

The next day the  bruising was pretty bad and the pain was in my foot not my toes, so learning from previous experience (where I didn’t seek medical attention for a finger that I thought I had sprained in a rugby match…but after a month of it still being painful, crooked and swollen, I got an x-ray and found out I had broken the finger), I thought it was best for me to get an X-ray for my foot. After a couple calls we discovered that since it was the weekend I would have to go to the hospital to get the X-ray. So off I went went to the the hospital in rural Australia where the doctor thought it was likely a broken metatarsal (foot bone). Unfortunately in the small community, the X-ray technician was off until Monday and my possible broken foot was not a medical emergency.  He said I would need to come back on Monday morning for the X-ray. So he put a half cast on for the weekend and sent me off with crutches.

Over the next 36 hours I learned to be a patient. Hopping around on crutches was humbling.  Walking with them took a lot of energy. I had to stop to rest or sit down to take a break. Simple things like getting a drink from the fridge or  going to the bathroom was a lot of work. And this was just a foot cast.  I could not imagine trying to do things from a wheelchair.  Fortunately on Monday the X-rays were normal. No cast or splint was needed and they took off my cast. I could walk on my foot. It may take a while to heal but I had a great appreciation for walking, even if I needed to walk slowly.

Over then next few weeks, I had to adapt.  My usual exercise is running and I clearly could not run. It was painful to walk. After a few days walking became less painful.  I realized that I needed to get my activity in separate times.  Rather than getting exercise in a concentrated time of 30-60 minutes, I had to separate my walking to several shorter walks of 10-15 minutes.  I discovered that even with my injury I could achieve the recommended 10,000 daily steps. From this accident, I realized that there may be other people who need to split up their walking or activity time to achieve their goals.  Maybe you can get more steps in each day by dividing them up into shorter walks at different times during the day. Give it a try!!